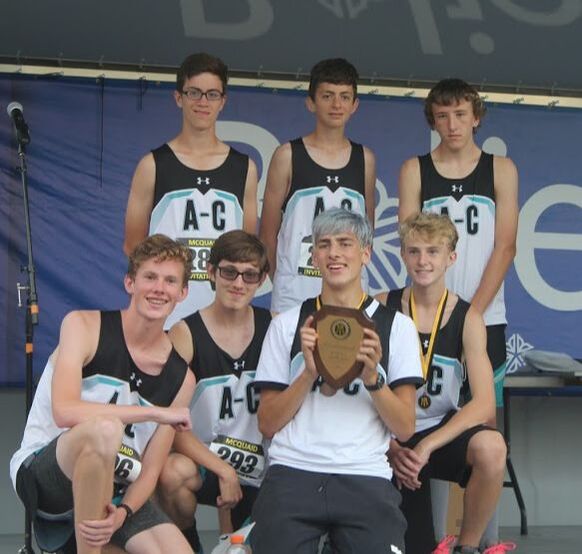 Download File
Thursday, July 16th
Fall Updates
As quickly as I can write up state rankings, the state can decide to cancel the state championships! Obviously this is a let down to the entire team, particularly those seniors that were hoping to qualify for states on last time. All we can do in the immediate future is focus on what we can control, and hope there is some season at all. The new official start date for fall sports is September 21st. The timeline for when racing will possibly start has just shifted significantly. There is still a possibility that fall sports will be cancelled altogether, and in that case cross country would be run in an abbreviated 10 week season during the spring. More details can be found in the file above.

My advice - keep running, keep going to captain's practices, and stay positive. We still plan on providing the incentives we laid out for training over the summer, including T-shirts, breakfasts, etc. The Nike regional meet has been cancelled, so we may end up adjusting the incentive plan. We are brainstorming ideas of what to do with all the fitness you will have coming in to the fall if there is no season, so stay tuned. Please reach out if you have any questions, comments or concerns!

Wednesday, July 15th
Preseason Rankings
Before I jump in to some nerdy stats about this fall, Chi and I cannot put into words how proud we are of everyone for showing up to captain's practices, running on their own and logging runs. I drove by the school on Monday and was ecstatic to see 11 or 12 XC kids wrapping up some hill sprints. If you want to build a strong house, you need to build a solid foundation. Summer is the time to build that foundation so you will be healthy and happy during fall running! A reminder that the only way you can come to the Nike meet this fall is if you log your summer runs. Here is a link to the document we came up with that discusses what you can earn by running over the summer:

It's that time of year where the preseason rankings start paving the way for the fall XC season. Tullyrunners released their individual NYS and national rankings, and a few Ark-Can-AA athletes made the list. While I urge you to take any rankings with a grain of salt, it is neat to see some of you listed on a website other than this one.

​The girls rankings came first, featuring Jenna listed as 36th on the class D list. Jenna finished 3rd at sectionals, and 31st at states last fall in Plattsburgh. In a very successful indoor campaign, Jenna lowered her 1000m from 3:37 to 3:17, 1500m from 5:37 to 5:21, and 3k from 12:20 to 11:52. After getting a taste of what competition at the state level looks like, Jenna should be set up to have a very strong fall season. Chloe, Mackenzie and NyVeah were the 2, 3, 4 punch last fall and they seem to be training very well this summer. Mackenzie and NyVeah were 40th and 41st at sectionals, and adding Chloe in to that mix with another year of running under their belt makes for a very interesting top 4. The mystery is the next few girls on the team, including SyAnna, Yasmin, Tressa, and Rachel. Tressa battled injury last year, but when she was healthy she managed to find herself as the 2nd or 3rd girl on the team. Rachel was the 3rd runner behind Libby for the entire 2018 season, and Yasmin and SyAnna were battling injury last year. Emma and Tallulah are moving up to varsity and may be immediate contributors. It also looks as if both Barrett sisters are returning this year, as well as Alexis, Brennah and Taryn. With a healthy team, and the addition of Rachel, the girls team could be looking at their highest sectional finish since 2013 when the girls finished 5th.

Now for some speculation. The fall sports season is still a question mark, but one option that has been presented involved shuffling some sports around which would have XC and golf as our only options for fall sports. As we know from the NXR meet last November, there are some soccer players that could make an immediate impact on the girls team. Guillianna's performance would have her ranked 4th in section V and 27th in class D states. Emily Pfaff's performance would have placed her around 39th at sectionals. Factoring in just those two girls would put the team around 118 points at sectionals last year, which is a for 2nd place. Addison is coming back down to class D, and they are looking to qualify for states as a team for the 5th time in the last 7 years. They have been very dominant, and will be at the front of any race you put them in, regardless of classification. All in all, it makes for a very exciting season for the girls.

On the boys side, they return 5 of the 7 runners from the state team. The team rankings have not come out yet, but I get the feeling they will enter the season ranked 6th behind Beaver River, Delhi, Tully, Sauquoit Valley and Addison. Like the girls, Addison is the favorite to win the boys class D section V race as they have made it to state every year since 2015. On paper the Ark-Can-AA boys may be favored, but history and experience, along with coach Lyons knack to always peak runners at the right moment, make Addison a force to be reckoned with.

Last year - the boys managed to edge Maple Grove on the heels of a disqualification of their top runner. They have graduated 4 of their 7 runners from their state team. While they will be competitive, this may be a rebuilding year for the studs of Bemus Point. Beaver River ran away with the race last year and they return 6 of their top 7 runners, including the top 2 ranked boys in class D. They look unstoppable on paper which should be a huge motivator to our boys this summer. Delhi was the runner up last year, and they return 6 of their top 7 runners, including a dominant 1, 2 punch in Diego Aguirre and Jonathon Hadley that finished 10th and 12th at state last year. Their 4th and 5th runners were right next to Dom in Plattsburgh and their 6th and 7th runners were about 20 seconds behind our 7th runner (Logan). Sauquoit Valley and Tully both return their entire top 7 which were 2nd and 3rd at section 3 sectionals last year. Luckily, each section can only send 1 team per class, so while we may rank behind these two teams, it is very unlikely they will make it to the state meet as they would have to upend Beaver River.

Addison returns 5 of their top 7 from their sectional championship team and they match up very well with our boys. If you merge the times from sectionals last year, we would have beaten them by a very narrow margin. However, that is with a 5th man that was a freshman and they were missing one of their top runners in Levi Riley for the entirety of the season. If he is healthy and running again, they will be the team to beat.

​The boys definitely have their work cut out for them, but enter the season with Pierce as the 20th ranked individual in class D, Cameron at 36th and Dom at 37th. Micah's grade is incorrectly listed on website, and I believe he would be right behind Dom at 38th based on last year's results. Dylan was next in line after his 32nd place finish at sectionals, followed by an excellent squad of Paul, Dakota, Braydon, Andrew, Salim, Evan and Titus. All of those boys had excellent seasons last fall, so it will come down to whoever has the most consistent summer training. The jump between 9th and 10th grade can often be dramatic in performance with some boys, and the majority of that group have only run one year of XC. With racing experience and a year of training under their belt, it may be a revolving door of who is in the top 7. Stu and the Stauring brothers have been logging very religiously, and I really think it will pay huge dividends in the fall. Ethan and Hench have been running either on their own or at captain's practices and look to put up some great results during their senior campaign. New comer Jacob Broughton also signed up and we are happy to add him in (he ran modified track in 7th grade, and comes to us with a background in many sports). As the boys chase down their 2nd straight title at sectionals, it may be a very similar crew from last year.

The modified team will feature Cooper, Ibrahim, Ethan (whom we have yet to meet), Molly and Lily. We are very fortunate to welcome new faces to the team!

My rambling of the day is done - I am very excited and optimistic about the fall season. Unfortunately, I can all but guarantee some of the bigger meets like McQuaid will be cancelled this year due to concerns about COVID-19. Stay positive, keep hydrating, and keep in touch!
​
Monday, June 29th
Summer Training
Below is the link to the document for summer training. If you have any questions, please ask! More explanations to come.
arkportcsd-my.sharepoint.com/:w:/g/personal/swhittemore_arkportcsd_org/EZxDoCWeDg9LjLRk46Hv5G4BiwXtQwLZFT899BFrWQE3kw?e=TOgswz